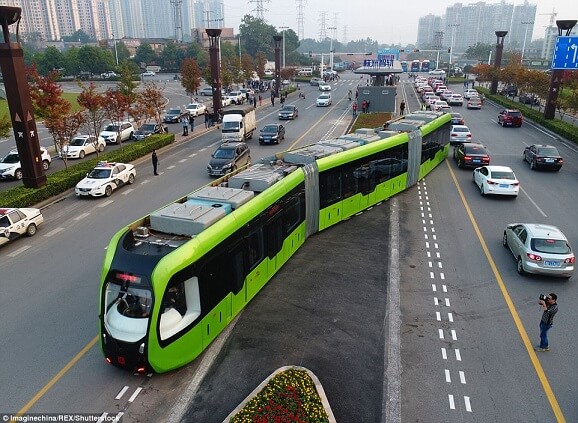 It was designed in 2013. Each train can carry up to 300 passengers. The system has rubber wheels on a lightweight plastic core.  After a 10 minute charge, the train will travel around 25 kilometres.

The "railway" is 3.75M wide and merely consists of dotted lines painted on the road. There is also facility for the train to identify and communicate with sensors on the pavement to send and receive travel information. The "train" will be fully autonomous in the future.

CRRC is one of the world's largest train manufacturers. (Name removed for personal data privacy reasons), claims it will have a life-span of around 25 years and the system is much cheaper to build than a traditional tram or subway system.

The testing is being carried out in Zhuzhou, population four million. If successful it will be rolled out to other parts of China.