MIT rolls out its driverless scooter 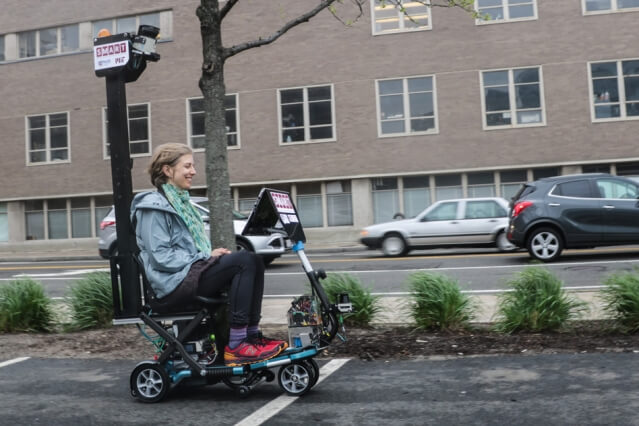 An autonomous mobility scooter runs new algorithms that are said to work both indoors and outdoors (Credit: MIT)

Make way Autonomous cars, because now there are autonomous scooters. A team from MIT's Computer Science and Artificial Intelligence Laboratory (CSAIL) has developed a self-driving mobility scooter using algorithms that not only allow users to sit back and enjoy the ride, but could be applied across a spectrum of different vehicles. According to MIT, this would allow the mobility impaired to swap from scooters for moving inside buildings to golf carts in car parks, to autonomous cars on the road.

The scooter is a demonstrator of a new comprehensive autonomous mobility system and was designed by CSAIL in partnership with the National University of Singapore and the Singapore-MIT Alliance for Research and Technology, using sensors and software from experiments with self-driving cars and golf carts. The team says the reason for reusing this configuration was to allow for concentration on new uniform navigation and control algorithms.

These algorithms are based on three layers of software. The first are low-level algorithms that respond immediately to changes in the vehicle's environment to avoid collisions and stay on course. The second layer is made of localization algorithms for constructing maps and navigating, while the third is a scheduling algorithm to allow the vehicle to operate as part of a fleet and be shared with multiple users.

The new algorithms are said to work both indoors and outdoors and were even able to negotiate MIT's famous Infinite Corridor – a straight and largely featureless hallway 251 m (825 ft) long, which is difficult for robotic navigators to orientate themselves. However, the algorithms could handle it without getting lost.

But MIT has greater ambitions for its algorithms than mobility scooters. The engineers see the development as a potential standard system for autonomous vehicles of all types. This would allow users to swap from one type of ride to another, such as from scooter to golf cart to car depending on which is available or most appropriate for each stage of the journey.

The team says the new algorithms are more practical for performing reliability analysis of the system's performance. The setup makes it easier to verify if the various layers are working properly, is less complex, and there's no need to keep reinventing systems for different vehicles. In addition, data can be easily transferred from one vehicle to another and, because the algorithms interact with the environment in different vehicles, they learn and improve their performance.

The new scooter made its public debut in April of this year when over 100 people were invited to take it for a spin as part of a test of the software. Before their ride, the visitors were asked to rate the scooter's safety on a scale of one to five with five the safest, then to do so again after the ride. According to the team, the scores boosted on average from 3.5 to 4.6.

The video below shows the autonomous scooter making the rounds.