Will autonomous cars make this traffic a distant or a fond memory in future?

Suddenly the autonomous car seems to be waiting just around the corner. With the massive investment going into developing this new technology (or combination of technologies) around the world, it seems we should rather be preparing for its arrival than discussing the timing.
The Ford Motor Company has announced a self-driving car in its line up by 2021. Uber has already begun testing a fleet of autonomous cars to deliver taxi services in Pittsburgh (USA) (with drivers ready to take over, for the time being).  A similar trial is underway in Singapore. And recently the Christchurch Airport announced the trial of an autonomous shuttle: no driver and no steering wheel on board.

There are any number of predictions being made about the likely impact of ‘driverless cars’. There is a whole spectrum, from ‘heaven’ to ‘hell’ (and probably back again)*.

In the ‘heaven’ version, the autonomous cars will all be owned by fleet service providers (think Uber without Uber drivers) and over a relatively short period of time most people will stop owning and driving a personal vehicle, opting instead to call the service when they need mobility. In this version, there will be a huge reduction in the private vehicle fleet as the number of vehicles required to deliver all the mobility needed has been modelled and is predicted to be at least below half of the number of vehicles in use today.

Importantly in the ‘heaven’ version, it is expected people will share these vehicles, both concurrently (like carpooling) and consecutively (like car sharing). As a result, even demand for public transport will be reduced in the cities of the world, and there will be a lot less traffic congestion.

In the ‘hell’ version, there will be far more cars, as each person graduates from owning a private car they drive, to owning driverless cars they direct. In this version, children, elderly, and pizza will all be passengers or cargo at different times, along with many deadhead trips to collect these non-driving passengers and cargoes. Similarly, rather than park a vehicle at work, it will be sent to run errands during the day.

The hell version involves less demand for parking, but big increases in Vehicle Kilometres Travelled (VKT), and traffic congestion will probably go through the roof.

Of course, the eventual reality will be somewhere in between heaven and hell, probably here on earth. The question is, can civil society influence the extent to which the outcome is more heavenly, rather than more hellish? Would we want to?

This imminent arrival of the autonomous car creates a huge challenge for cities and regions. Most metro areas transportation plans articulate a set of investments they intend to make in roads and public transport over the coming few years. In Auckland it runs to billions of dollars. The plans do not anticipate the disruption the autonomous car might bring.

On the one hand, these investments might turn out to be completely necessary if the hellish outcome eventuates. On the other hand, there is a risk these investments will become ‘stranded assets’ and future debt obligations related to them will not attract the expected revenue streams. Even if there is a low assigned probability of a heavenly outcome, the size of the potential losses should give transportation decision-makers reason to pause.

What is a city council or regional transportation authority to do? Here are three suggestions:

2.    Secondly, to deal with the increasing demand for mobility in the very near term, minimise demand for vehicle trips. Mostly this means getting as many people as possible to travel as passengers (in cars, vans, and buses) rather than as drivers, as much as possible, particularly for trips involving travel on congested corridors at peak times. It can also mean increasing non-motorised trips (walking, cycling), and trip avoidance (teleworking).

3.    Thirdly, seek out policy settings to give the best possible likelihood of a heavenly-leaning outcome to the eventual arrival of autonomous cars.

The dividend from this strategy is potentially massive. There is ample capacity in existing vehicles and roads to reduce congestion right now if people will agree to use the existing infrastructure more effectively. If successful it will create breathing space, probably at relatively low cost, while the disruption plays out – it will reduce demand for expensive infrastructure assets. Secondly it should help create the culture of sharing needed to achieve the more heavenly outcome from autonomous cars. Thirdly it can have both short-term and long-term benefits regardless of the eventual shape of the transportation system.

*There are several references to the idea of 'Heaven or Hell' as a result of the arrival of the autonomous car, and I cannot claim ownership. The earliest one I have found so far is from April 2014.

This article was first published in the New Zealand Herald on 18 October 2016. See the online version here or the picture of the print version below. 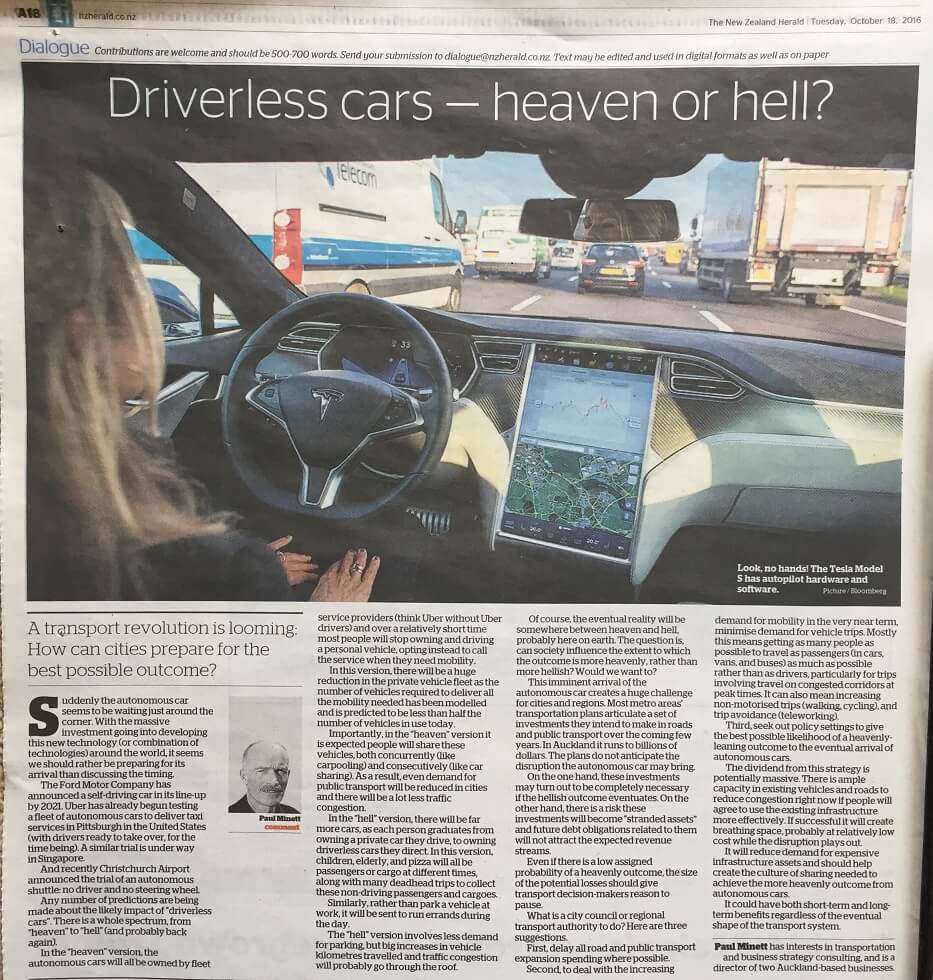