We have recently been advised about the Cube Autonomous Car security platform. We expect Blockchain to be integrated more widely into Autonomous driving applications over the coming months, so we hope the below article will be of interest.

Cube is the blockchain security platform for the autonomous car. The key to Blockchain is that technology
ensures trust. Cube uses block-chain technology to ensure the security of autonomous mobile
networks.

These days, the car is a mass of software with over a million lines of code. Cars started to use more
networks, and autonomous cars should depend on the network heavily for self driving. It uses network
navigation route, traffic information, vehicle to vehicle information, and remote ECU upgrade.
This means that autonomous vehicles have a greater risk of being hacked. Perhaps no one has ever
suffered from a hacking virus once or twice. However, if a self-propelled vehicle is hacked, it can be a
huge risk.

Cube creates a security system that protects these autonomous vehicles from hacking. Unlike past
methods that did not prevent hacking, we use blockchain technology. Applying blockchain is not a
hack at all, unless you hack hundreds of thousands of computers at the same time. Cube uses
blockchains, artificial intelligence, and Quantum Hash Cryptography technology. 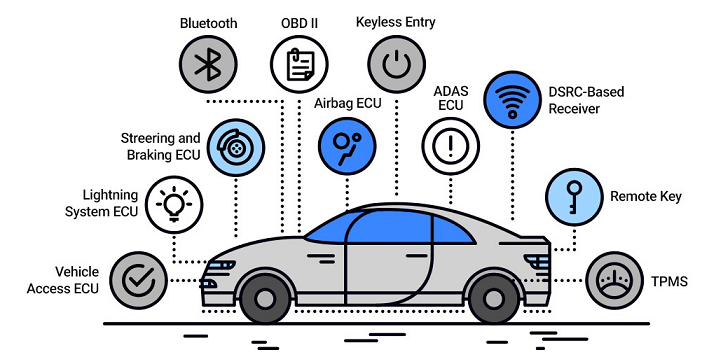 The most hackable and exposed attack surface on an autonomous car

In the operation of autonomous vehicles, many IOTs provide information to autonomous vehicles. The
attacker seeks to gain access to the network between an autonomous car and IoT or traffic center,
and manipulate the software binary with the goal of injecting malware into a large number of vehicles.
In such instances, the hash of the infected binary differs from the hash included in the multisig
transaction which is signed by the SW provider and the OEM. Thus, the vehicles can readily detect
such an attack before installing the infected SW update. .

AI Deep Learning Layer
The second is AI Layer. So far, network security is a passive system that collects patches to prevent
past hacking cases. Cube trains in supervisor mode in the past as a primary case, and construct a
defense system against it by creating malicious attack scenarios that are likely to be made hundreds
of millions of times. Cube’s Intrusion Detection System using Deep Neural Network for Vehicle
Network Security has two types, a discriminative deep architecture and a generative deep
architecture, depending on how the architectures are exploited. After the pre-training, fine-tuning will
be performed using the gradient descent method with the supervised learning. While Blockchain is
used as a first and main security method, AI Deep Learning based security will guarantee the double
defense system.

Quantum Hashing Cryptography Layer
Blockchain has improved security by using hashes appropriately. However, there is a growing concern
that as the performance of computers grows rapidly, hash cryptography can become a limitation.
Cube develops quantum cryptography to prevent malicious attacks against autonomous vehicles.
This Quantum Cryptography will contribute not only to the autonomous drive, but also to the overall
upgrade of the entire Blockchain technology.

1) Cube is to receive a fair audit through a vote by five globally recognised and credible
accounting firms.

2) Cube shall publish monthly operational and financial reports to share the operational status
of the company with its contributors.

3) When hiring new staff members, such as developers, Cube shall implement a validation
process as well as thoroughly examining the candidates’ portfolios and setting reward
policies in accordance with their abilities.

4) The company’s budget shall be tightly managed so that it will always be possible to operate
and manage the company without additional funding for more than three years.

Token Valuation Policy
To protect its contributors and provide them with better profits, Cube will be operated as follows:

1) The executive managers of Cube are bound by a lock-up system, which means they are not
entitled to make token sales for one year. The lock-up policy is intended to make sure the
executive managers receive suitable rewards only after the company grows enough.

2) Cube shall strictly control the use of its budget to stably increase the value of Cube tokens. At
least two-thirds of the beginning budget must remain after one year of funding. Using more
than one-third of the beginning budget for any single event requires the approval of at least
half of both the board and the contributors participating in the ballot.

Team
Team members can be divided into three categories.

The first is the team for autonomous car communication part. Worldwide, autonomous vehicles were first created in 1995 by the computer engineering department at Carnegie Mellon University. Three members of that department, and one
MIT artificial intelligence student are key members of Cube.

Third category is the automotive team.  3 members (name removed for personal data privacy reasons)
had worked at Daimler, and Porsche as developers.

How does Blockchain relate to the Driverless / Autonomous vehicle?

An Introduction to Blockchain